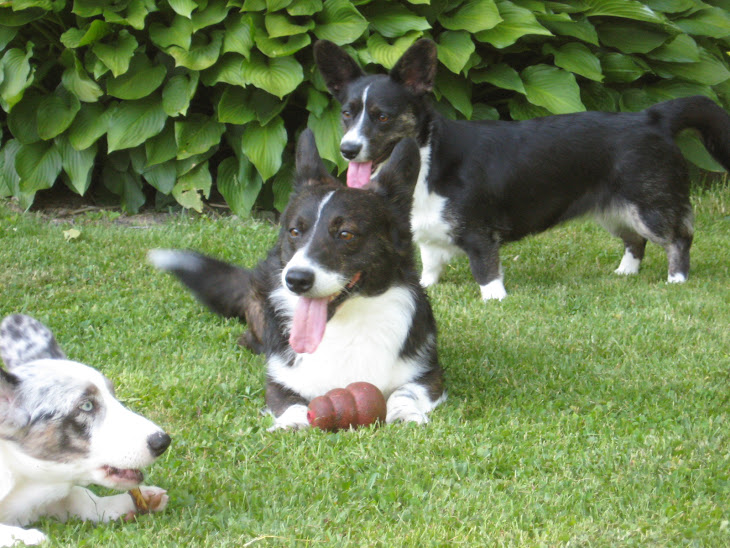 There are some people who just shouldn't have dogs. That is all.
Posted by Dayna Dawn Small (aka Barter) at 12:23 PM 1 comment:

Picking which side of the fence

Before the scheduled spay/sudden heat debacle, my plan had been to attend Western Reserve and, at that time, look at an exciting 14-month old bitch on which there is the prospect of a co-own.  Having bounced back and forth over the fence roughly 3,256,913 times since Elli came into season on Sunday, I have decided to stick with that plan.

If I decide against the co-own on this bitch, and don't find some other arrangement while I am at the specialty, I will x-ray Elli's hips, etc. before her winter heat, and assuming all is well, will breed her then.  (I'll admit to having gotten a little excited at the prospect of having little ones.)

So, as ever, stay tuned!
Posted by Dayna Dawn Small (aka Barter) at 8:49 AM No comments:

So, last week I made an appointment for Elli to be spayed this Wednesday.

I had joked that if she came in before her spay then I was going to take it as a sign and breed her.  Fate appears to have called my bluff.

Since I generally change my mind every five minutes and have a hard time making a decision about what to have for lunch, I'm looking for some feedback.

I am considering doing a test breeding to see what I might get from Elli.  Even if there are no conformation-ring superstars in the litter, I'm confident that all will be sound and athletic, and there should be some very good performance prospects.

However, I'm a little worried that, with the economy being what it is, there may not be enough prospective puppy buyers.  Also, the puppies would be ready to go to their new homes around the end of November/first of December -- not the world's most ideal time to bring home a new puppy.

Does anyone have any advice/comments/suggestions?
Posted by Dayna Dawn Small (aka Barter) at 12:08 PM 4 comments:

Hey, long time no post!!  I know, I'm horrible.  If there was anything worth blogging about going on w/r/t the dogs, I'd blog it.

In the meantime, I have an acquaintance who is looking to place her 5 year-old male Cardigan.  Prince is neutered, terrific w/ people, but would prefer not to live in a house with a bunch of other dogs (some of whom are Poodles, so really, I'm not holding that against him).

Photo and details available on request. Drop me an email at daynadsmall@gmail.com
Posted by Dayna Dawn Small (aka Barter) at 9:56 AM 1 comment:

It appears the Cardi clan will soon have a new "step-sister," and I'm afraid she's going to be a fluffy: 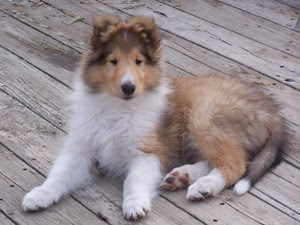 Introducing... Anna! What the hell am I doing with a Collie? Funny you should ask.

I have a friend and co-worker who has been looking for another show-potential Collie bitch, as the first one she purchased didn't quite make it. In discussing what she was looking for with one breeder, the breeder said she'd like a guarantee that the puppy would in fact be shown and a good effort made to finish it. My friend, who is older and on a limited income, was honest and said that she could not guarantee that, as she herself is not really able to run a dog around the ring, and a professional handler was not in the budget.

Has your mouth ever up and said stuff without swinging by your brain to say "howdy" first? Just me? Okay, then. Anyway, my mouth up and offered to co-own the puppy with my friend and show it, for a puppy back when she breeds her. (And by "puppy back" I mean the proceeds therefrom, because seriously, I do NOT need a Collie.)

I guess that means that, between now and when Anna comes of show age, I have a LOT to learn about show-grooming a Collie. And I need to find some handling classes and figure out the transport to and from, and there will need to be some overnight visits so we're well-acquainted come show time, and there's a whole new set of people and politics and unwritten rules that I need to learn, and...

Damn, my mouth gets me in a lot of trouble.

*tap tap tap* Is this thing on?

Yeah, so, all evidence to the contrary, I haven't dropped off the face of the earth. Just having a lot of things that suck right now, and I tend to go quiet when that happens. I'm working on plans for things to be less sucky, though.

The dogs, however, do not suck. They keep me sane. Or, you know, less crazy than I would be otherwise. Cardigans = better than Prozac.

I took the boys to the Springfield shows in October. (Elli came along for the ride.) I showed Magnum on the Friday and Sunday for another Reserve and another major Reserve; Ian took the major Reserve on Saturday. Magnum is showing this weekend at Fitchburg and in two weeks back in Springfield. After that, I will likely be laying him off for a while; he's at That Age and the fuglies are fast approaching. I doubt I'll meet the desired goal of finishing him before he's a year old, but I can't wait to see how he morphs from a tubey, leggy, gangly puppy into a gorgeous, charming grown-up.

All of my protests aside, I would really like to get those last two points on Ian, so I may drag him back into the show ring while Magnum is on hiatus to see if he can finally pick them up. I don't know if that makes me stubborn or just plain stupid. :-/

Elli is now attending a Sunday agility practice in addition to her weekly class. The Sunday practice is great because it's held in a horse arena and there is space to set up a full-sized course, unlike at class. Consequently she's improving a lot on coursing as opposed to just working specific objects and skills. I still feel like she's a little "handler-capped", but Thom assures me that if I can't/don't want to try and title her myself, he will handle her to a title for me. Yay Thom!!

However, Elli may be taking a little time-out for motherhood duties, because I've about 80% decided to breed her when she comes back into season, probably in February. If I do, the sire will be Fudge (CH Trudytales About Last Night, ROMS). He has -- and produces -- many of the things that I'd like to improve on Elli. He has also produced well with both her mother and her grandmother, and I'm pretty excited to see what may come of it. It will be an all-black litter, and irregardless of whether I get a conformation super-star out of it, I DO expect sound, athletic, drivey puppies. If all falls into place, I should have puppies ready to go to their new homes in June.
Posted by Dayna Dawn Small (aka Barter) at 2:03 PM 1 comment:

Saving the Cute for Last 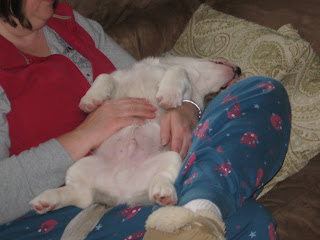 Apparently I hadn't dumped the camera for a while, as this is a much littler Magnum flopped in my lap. Yes, those are frogs on my pajamas. Yes, they're purple. Yes, they're wearing nightcaps. No, I don't know either. My mother bought them for me. Don't judge. 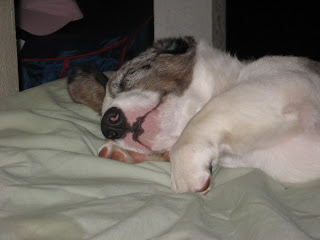 Can you even stand the widdle paw under his widdle face? 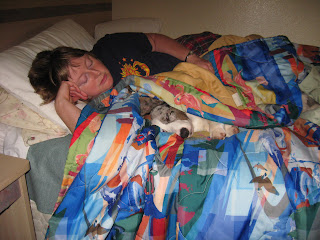 This is what happens when you leave both the camera and your mother unattended in the hotel room. Clearly Magnum was stressed and traumatized by his first dog show/hotel experience.

So, you know how, when kids are little, they can be uber-embarassing? And you find yourself praying for the day when childhood turns to adolescence, when suddenly the tables turn, and your children suffer profound mortification just by virtue of the fact that they HAVE parents?
Yeah, that doesn't so much work for dogs. But if it did, behold Exhibit Number One in the blackmailing of Magnum: 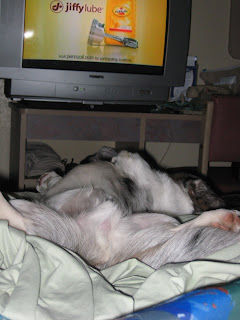 So it's not the Ritz-Carlton of dogdom. More like the Motel 6 version. But at least the dogs have a pool to jump in and cool off. 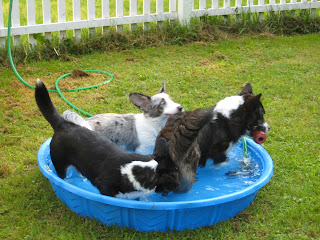 Three corgis, one Kong. You do the math. 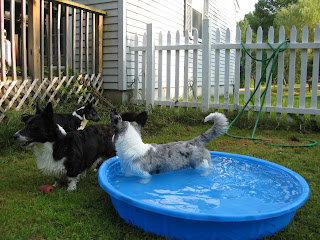 Magnum may have the pool to himself, but Ian still has the Kong. And, also: Can I take a kiddie pool into the show ring to self-stack my dog? 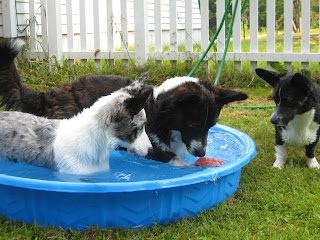 Screw apples. We bob for Kongs. 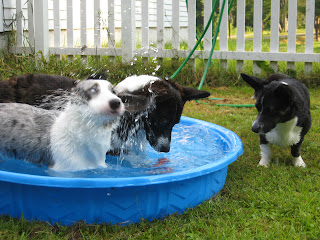 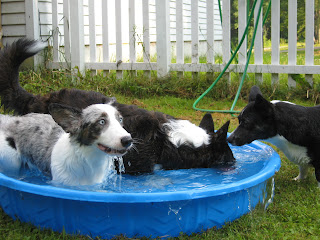 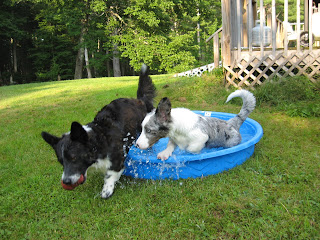 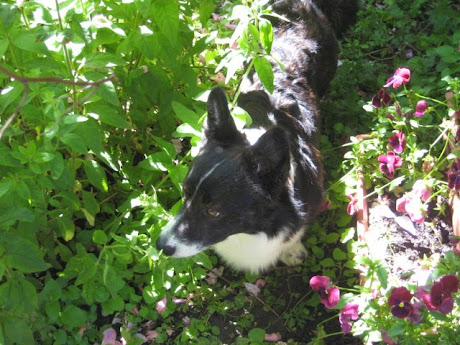 Dayna Dawn Small (aka Barter)
Warren, Maine, United States
When I'm not playing with the dogs, I can be found working on one unfinished novel or another, watching sci-fi on TV, reading contemporary fantasy, working on the vegetable garden, or haunting Television Without Pity, Twitter, or Facebook on the internet.

Smalltyme Cardigans is a tiny kennel-without-a-kennel in Warren, Maine. I chose "Smalltyme" not only for my last name, but also because I will never be a big-time breeder. My dogs live in the house, climb on the furniture, heckle the cats, and go hither and yon with me. They also compete in conformation, obedience and agility. I hope to breed my first litter of puppies in late 2010/early 2011. Thanks for visiting!